Got a wonderful blast of sunshine yesterday. It was an absolutely glorious autumn day. Today? We’re back to much-needed rain. Enjoy. The first is a still-green maple sapling, the second is one of our century-old-plus cedars, the third is a shot of the also century-old tamaracks (larch) turned their wonderful autumn color just before they lose their needles. (Yes, they are one of the few pines that lose their needles every fall, so, those of you unfamiliar with them, don’t cut that tree that’s bare if its a larch, because, yes, it drops its leaves in the fall.) 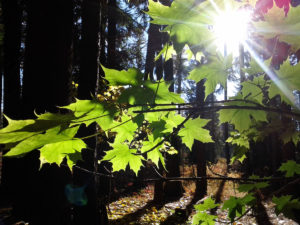 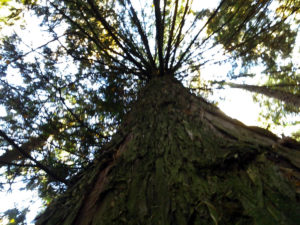 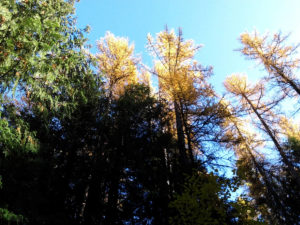 Gravy Days in the Country 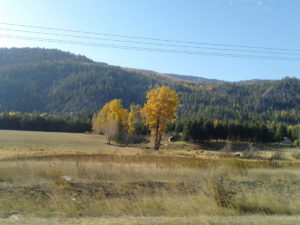 September and October are my favorite months. Yes, there’s November looming with its scramble to batten down the hatches, but September and October are those months where summer work is mostly done, and I can sit down and simply enjoy Earth.  Sure, there’s a bit of cleanup and tidying yet to do, but, all in all, it’s time to wallow in the relative quiet of kids gone back to school, tourists gone home — a time to embrace the Gravy Days, as my mother used to call them.

Our October this year didn’t start in gravy. There was a cold foreboding to the weather that promised a very cold, hard winter.  Everybody felt it.  Then, midway through, things changed.  And we got, not Indian Summer, but Gravy Days, all the same. Last fall clean-ups in pleasant progress and, yes, finally, the roofing crew, promised in Spring, here two days before the rains come. 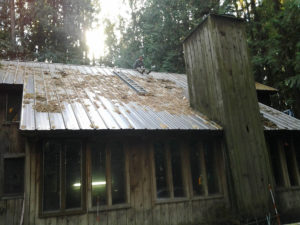 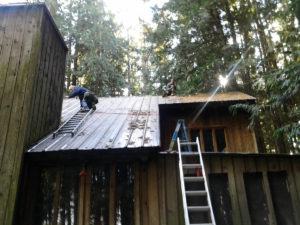 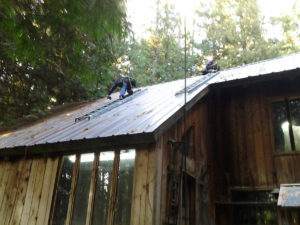 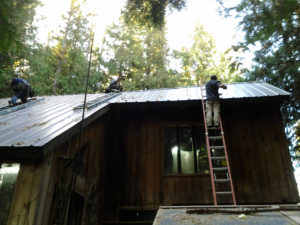 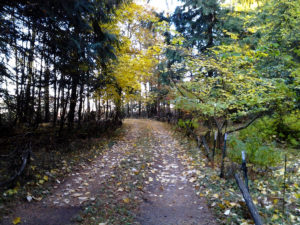 Halfway done (the rest, already completed, is behind me) 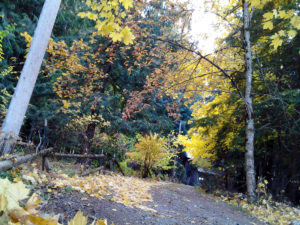 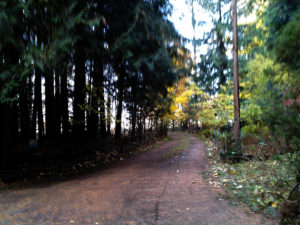 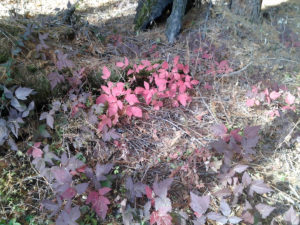 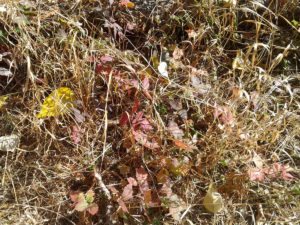 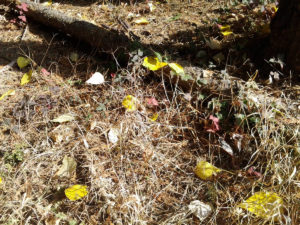 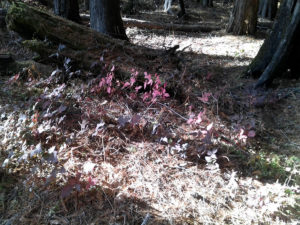 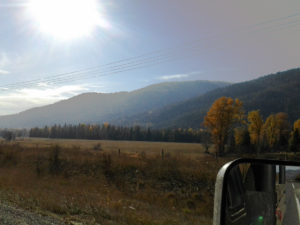 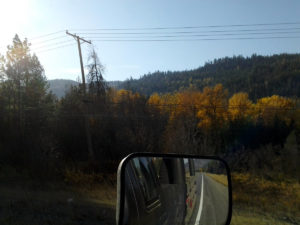 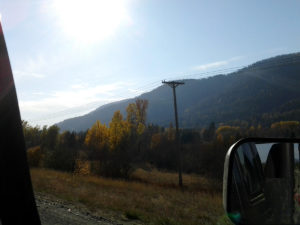 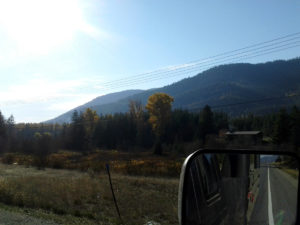 Start of One of the NF Books I’m Writing

In case you think I’m fooling with you, I thought I’d share the draft first chapter of one of the non-fiction books I’m working on. Here ya go. Tell me what you think over on my DLKeur Writing As page on Facebook.

I like books that get right to the point, so let’s, shall we?

I’m, by nature, a pantser, that is, I like to create organically, writing on inspiration driven by emotion, rather than pre-calculated structures.  I like to let my characters lead the way through the crises presented to or perpetuated by them as churned by the story’s plot engine.  It’s an exciting way to write …if you know what you’re doing and where you are going.  It has surprises, elicits moments of pure genius, and, most of all, is sublimely fulfilling.  There’s a ‘but’, though.

Organic novel writing, or pantsing (‘writing by the seat of your pants’), has its problems, namely left turns, right turns, U-turns, and, worst, winding up completely lost.  These problems can leave the writer frustrated and discouraged, their manuscript unfinished and abandoned.  There’s a reason for that, and there’s a way to avoid it.

A successful pantser, just like a plotter—a writer who calculates what happens next in a story based on their detailed outline and story mapping/plot mapping—should know a few things before plunging into the writing, namely:

You also should know the main conflict and pretty well understand how the plot will flow (the overall plot mechanism to be utilized).   Most importantly, though, you must know your ending …usually. (Don’t you just love exceptions? We’re going to proceed without discussing those exceptions, though, because they so very rarely apply to such a very few writers.)

Further, you really should know your main character(s), their vulnerabilities and strengths.

What you don’t have to know is the how of where the story is going to go next and next and next as you write it through, not unless you’re a died-in-the-wool plotter.  If you are a plotter, then, yes, you will need to know exactly or all but exactly where your story and its plot are going next and next and next through every moment of every scene.

My main complaint about plotting is that there’s absolutely no excitement or real joy in writing a novel via the plotting method.  It’s pure labor.  Once you’ve dryly outlined the whole of it, it’s a matter of padding it out so it holds reader interest.  My brain goes cold and my eyes dry up doing that, so that method is absolutely not something I advocate for anyone who isn’t writing pot boilers for minimum wage income.  And nothing really genius usually happens unless the character really takes it off script—those extreme left, right, or even U turns organic novelists regularly can experience, twists and turns that often lead to surprising, even brilliant results, but sometimes lead to complete disaster.  Nice thing about disasters is that, as the creator, you can go back to the fork in the road that leads to it and try again, over and over, taking yet another pathway until you find the one that’s perfect.  Of course, that means that writing without plotting can take regrettably longer to complete.

Disasters like this rarely happen to me, and there’s a very good reason.  It’s called ‘know your story’.

For those of you who read my How to Write a Good Book in 17 Days, you’ve already seen a crash course that employs this technique.  In this book, though, I’m going to elaborate on the process and start from inception and conception, then walk you through execution.  Let’s begin.

Every story has a beginning, but that beginning is actually the result of an ending.  You’ll often see me end a novel or short story with ‘The Beginning’ instead of ‘The End’.  There’s a reason for that.  Because the story’s culmination is actually the beginning of the next story.  This is true of every cherished novel I’ve ever read, be it something by Mark Twain, Conrad Richter, Ursula Le Guinn, Kim Stanley Robinson, Greg Bear, Charles Todd, Prestin and Child, or any of the other many authors I enjoy reading, a list way too long to present unless you’re the kind of person who enjoys reading through the begats in the Bible’s Old Testament.  If you check your own list of favorite novels and novelists, though, I think you, too, will find the same to be true of your favorite author’s novels.

The end of one novel can beget a new unwritten novel’s beginning.  And therein lies a clue to effectively starting your novel…. 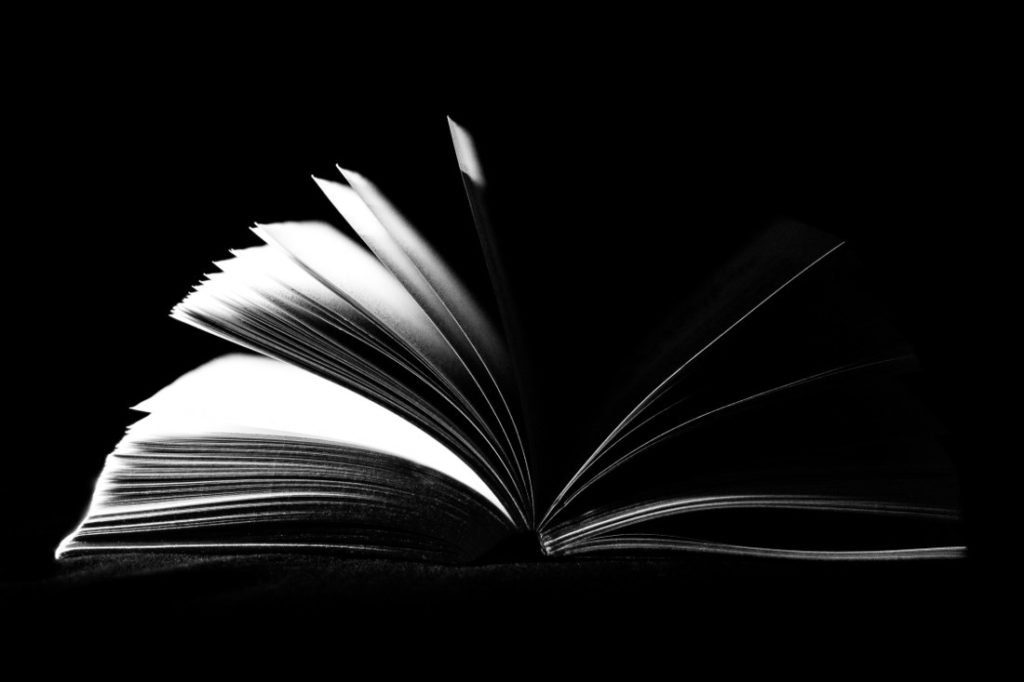 Rage, castigation, derision: Not only do we have constant contention on the main streams of social media, but we’ve got it in the groups and communities, as well, including, I’m sorry to say, the main flute group on FB. Can we concentrate on playing our flutes and discussing (with civil tongues and benevolent perspectives) the nuances of effective performance? No. Can’t seem to.

I took to lurking, then left the main flute subreddit over on Reddit.com — too much cliquishness support for questionable, even erroneous ‘expert’ advice. Then, here on FB, after one of the skirmishes that blew up over much ado about nothing, I took to mostly lurking on Flute Forum, https://www.facebook.com/groups/fluteforum/ . This isn’t because I don’t enjoy a lot of the people there, but because, again, there’s this contentiousness that creeps into any discussion, and anyone is fair game for contemptuous, derogatory treatment by cliques of a different mindset.

Then, of course, there’s the ‘show and tell’ that really should be relegated to one’s own personal FB pages and the “buy lessons/master classes from me” posts. Oh, yeah, and the “buy tickets for my performance this weekend at JackAndApes” posts.  These things I can do without.

You know, I really am on social media to interact with people, not to look at advertisements and duns for attention. I want to be part of flute discussion groups because I wanted to interact with other flutists. It doesn’t work, though. It’s become just like the present political and socio-cultural landscape — in a roil, a CONSTANT roil. It’s all fuss, fume, and bother, so, honestly, why do I bother.