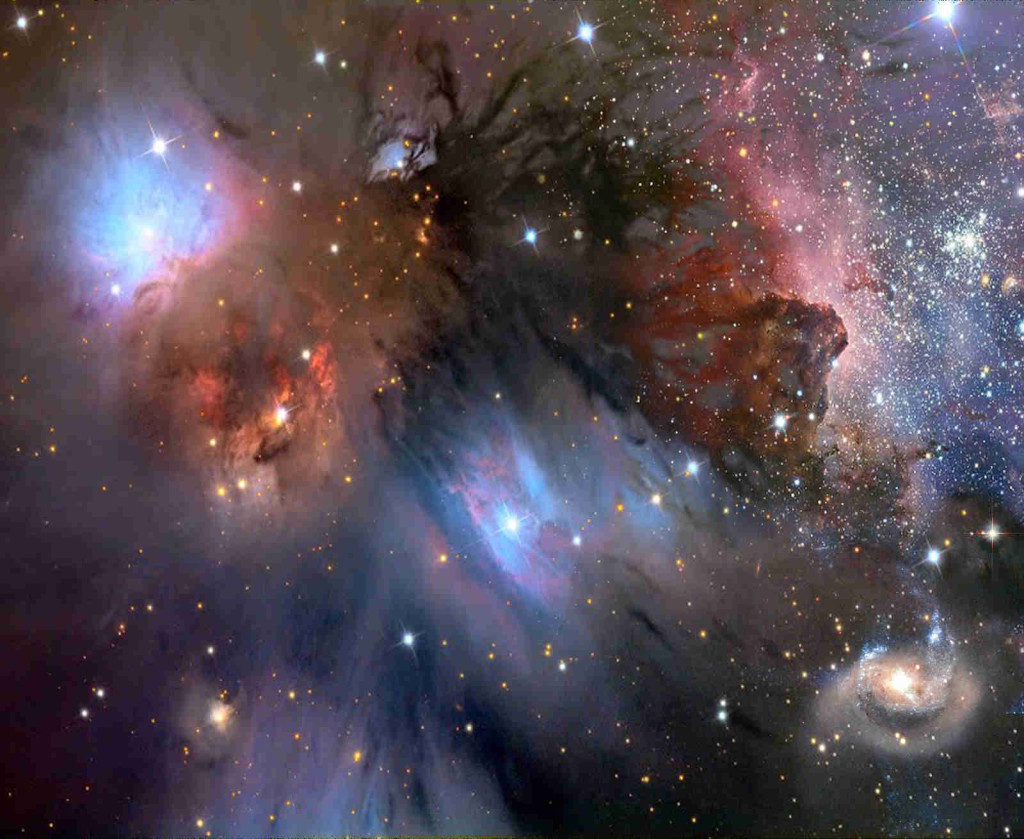 I woke this morning and opened my eyes to the world — my world — and its peaceful, benevolent calm. By chance, I closed them, again, and was startled to see the cosmos spinning, a sea of tiny stars.  Intrigued, I watched.

First came vistas I could recognize — Betelgeuse and the belt of Orion, Sirius and the Swan, the great square of Pegasus. Then that vista moved …or I moved, and went beyond what my brain recognized as known to see more, then, more than that, all moving. I opened my eyes, again, and knew I sat upon my bed …closed them, and there, yet, was cosmos.

Enthralled, I just sat and breathed, keeping closed my eyes to watch in wonder ever broadening horizons that stretched all ways to beyond the knowns of all infinity.  Then, a cat called — Pepper — demanding my attendance, and I opened up my eyes, again …left that cosmos to its spinning.

Rising, I made my bed, turned the plant lights on, started my day, and, yes, attended Pepper.  I cleaned the downstairs bathroom after morning ablutions, careful in that cleaning not to jostle and destroy a carefully constructed corner home (behind the toilet) of the room’s long-time resident spider.  Too close my hand, and, terrified, darting, she hid beneath her wedge of web, a thickened pad of strands just a little bigger than her inch-diameter self. I eased away and waited, and, sure enough, she came back as quickly, climbing back atop her bed to resettle and arrange her legs and pedipalps. I smiled, pleased that she is once again comfortable and happy in our home, hers in mine and mine in hers.

I made my coffee, then sat contemplating for the minutes that first cup permits me take before I must start morning chores:

When I go out into the natural world, I am embraced by nature’s quiet, by natural shapes and colors, all gentle and complementary to each other, sometimes sharp, sometimes muted, sometimes bright, but always gracious in their presentation. When I go out into the human world, I am accosted by a sea of rudely regimented shapes and structures, all saturated with a cacophony of too loud, unnatural sound and colors too intensely brash, those shapes, those sounds, those colors all rubbing garishly against each other.

When I go online, again I am accosted by this same cacophony and brash intensity. I can mute the sound; I can place a filter on my screen to dim the garishness.  What I cannot filter out is the human ‘rude’, a rude expressing forth an attitude of influence, of will, of conflict.

Why, I wonder, do we celebrate inflicting influence and will, wreaking battle, war, and conflict — the conquering of others different than us, their destruction, their obedience to “our” will, their subjugation, defeat, and even death?  Why is it that getting our own way, despite what harm, pain, and cruelty that means to others — any others, be it other human, animal, plant, or rock and mineral — brings us pleasure? It’s in the games embraced by the teeming multitudes, in the images and sounds the throngs prefer, in the very knit of what the masses label civilized. And all of it pits tribe against some other tribe, tribe against the world, tribe against nature and reality, tribe against its own members. And in ‘tribe’s’ triumph and glorification of ‘defeated’ enemy, there’s no recognition whatsoever that, within a moment’s time — just a moment — the tribe will again turn restless, craving violence, to find ‘enemy’ within itself to engage in battle and defeat in bloodied conflict.

It’s in the winning, in the gory glory of annihilating and stamping out another and the many other upon which humans seem to thrive. It’s in subjugating life, home, sustenance, perspective, culture, and proclivity of others, all (plant, animal, rock and other human), that humans find their satisfaction, never recognizing that their own lives, homes, and sustenance, their own perspective, culture, and proclivity is vulnerable when the mob turns to find anew another enemy from within.