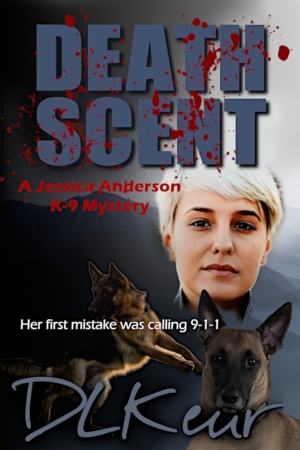 Drones were supposed to make life easier for Jessie and her search and rescue dogs. Instead, they’ve made everything a lot more complicated. Her equipment confiscated, her very freedom threatened, Jessica Anderson finds herself in the crosshairs of both law enforcement and a vicious killer when her drones discover a body on the slopes of Long Peak.

When evidence points to other victims, though, it’s Jessie and her search dogs who law enforcement needs to find their remains. What nobody suspects, though, is that the killer is watching, waiting, anticipating …ready.

Giant Milo, the Wonder Mutt, lay in a crouched ‘down’ position, still and sphinx-like, except for his tail, which tentatively brushed back and forth in the grass.  Like Oso, Milo was reserving judgment, but with his natural optimism.

Jessica Anderson touched the ‘on’ icon on the interface open on her laptop.  The two little machines sitting on the ground in front of her clicked a couple of times, lights on them blinking.

All three German Shepherds—Acer, Britta, and Sumi—pricked their ears.  The fur on their backs rippled a bit, while Mitch, the Marvelous, Jessie’s young Belgium Malinois, came instantly to his feet.  He tipped his head sideways, his attention riveted.

Predictably, her top ground tracking dog, a deep copper-colored Irish Setter cross named Queenie, bounded up to the little machines, stopped short, backed up, barked, then moved in closer.  One sniff, and she took off to race around the field in deliciously happy circles.  Queenie thought them some new game or toy …which, in a way, they were.  …And weren’t.  “Good dogs,” Jessie crooned.

All the dogs relaxed.  Momentarily.  Then all of them stood and went to full attention.  The German Shepherds, or, as Jessie thought of them, GSDs, raised their hackles.  So did Mitch as the drones came alive, the machines unfolding like strange insects as they engaged their tiny rotors to pull themselves aloft.

Only Oso and Milo were still open to the possibility that these weren’t ‘danger’.  Only Queenie still thought them marvelous fun.

“Good dogs, gute Hunde, brave Hunde,” Jessie called again, using both English and German to sooth her pack as the machines moved higher, hovered for a moment, then flew outward, following the path that Jessie had previously programmed into the software’s control interface.  “It’s okay.  They’re good guys,” Jessie said to the dogs.  “They’re going to save us a lot of time and effort.”  At least, she hoped they would.  Today would test that possibility.

Almost as one, the dogs looked back to her, and she smiled—her pack, The Motley Mutts, as her grandfather called them, and she was their pack leader.  “Good dogs.  Brave Hunde,” she answered them, English for her rescues, Queenie, Milo, Mitch, and Oso, German for the Shepherds, though, because of her constant use, all of them knew both lingos, now.

Watching her new tools circle the field twice, her dogs’ every sense tracking them, Jessie was pleased to see the machines were following her programming exactly.  She grinned, then touched in the second part of the program, one that would send the drones out to do a test search.  This will save countless search hours for us.  If we can just get Idaho to relax their privacy laws a little.  Still, there were other states.  Jessie wasn’t limited to state lines, not now.  Not with canine search and rescue expert Callen Parker on her side, and, so far, he was.

The all but silent machines disappeared in the distance, heading toward Long Peak.  Jessie hoped she’d gotten all the parameters right.  These were a lot better than the toys she’d been practicing with, but this was their first test flight, and, at five grand apiece, she didn’t want them flying into a tree or a cliff, thanks.  But, she’d already tested their proximity sensors, and they seemed to be working fine.  Still, though, she’d set the program to keep their altitude above the treetops and the Cliffs of Long.

Watching her laptop intently, she kept an eye on both their audio-visual feeds and their GPS positions on her screen.  So far, so good.  They were half a mile out already.  “They’re fast,” she whispered to herself.

A dog whined—Britta.  “Braves Mädchen, ganz braves Mädchen,” she said soothingly.  Acer touched his nose to his friend, and Britta yawned once, then lay down with a groan, Acer squatting down to sit next to her, hip to hip.

On her screen, the GPS locators were showing the little flying bots now a mile out and still absolutely locked to their programmed flight path on her test search grid.  She turned on the motion sensors just to see what they would do, and if they actually functioned the way the company said they would, sticking to the search grid and avoiding each other, but reporting movement.

Within moments, one reported in—what looked like maybe a raven taking flight.  The camera adjusted its focus, and the bird came crisply into view before disappearing into the trees.  The drone stayed true to its programming, maintaining flight path.

They were amazing, and so was the software that controlled them.  Not as amazing as her dogs, but Jessie was glad she’d come across the company responsible for building them—a small firm located in Alaska.  They were fast, light, and had twice the flight time of comparably equipped drones.  They were also more fragile, but the software helped with the flying.

At two miles out, some eight minutes into their weaving, criss-cross search pattern, Jessica caught sight of something the wrong shape and color on the mountain’s broken snow floor.  Taking manual control of the drone nearest to it, she lowered altitude and set the camera to target the object.

With sudden recognition of what it was, she zoomed in.  A proximity sensor blinked.  Her other drone avoided collision all on its own and was now crossing to the east of the one she manually flew.  It reported movement.

Diverted, she let the one she controlled hover on auto-pilot, hoping it caught movement from the body, while she turned her attention to what the other was reporting—another person, she realized.  That person disappeared into the woods, but the drone still sensed it.  She gave it autonomous control and watched, riveted, as the machine now dodged between trees, self-navigating on proximity sensors and its software’s AI.  Be careful, she pleaded silently to the little flying robot.

A flash of red….  The camera zoomed and focused.  The drone dodged and shifted, changing angles to auto-orient.  The flash of red reappeared—the backend of a pickup about fifty yards ahead, part of the vehicle occluded by the trees.  What she could see was that its tailgate was up, said ‘Chevrolet’, and it had no rear license plate.  There was the sound of the engine starting.  Then, the vehicle disappeared from sight into the trees.

Jessie touched in a command for the drone to raise altitude to above tree level again.  “In for a dime, in for five grand,” she muttered, hoping the drone’s proximity sensors accurately could sense overhanging branches above itself.  A dog whine answered her, but she kept her concentration on the screen, which had gone to a blur.

Shifting her attention to the other drone’s feed, she saw that, at least as much as she could tell, the body hadn’t moved.  Asleep, injured, or dead, she wondered.  And, deciding, she dropped the drone down close to investigate and saw what she didn’t want to.

Every dog came to full alert, their eyes riveted on her.