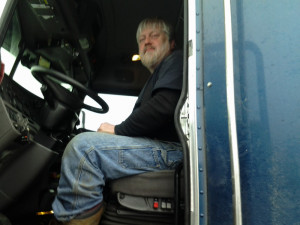 It’s bittersweet to hold your husband for 10 minutes after not seeing him for two weeks, then have to let him go, not knowing when and if you’ll ever see him again.

A Long Night of Snow Blowing Ahead

January 4, 2015 D. L. Keur
for the love of the livingthe personal side

It’s snowing. It’s been snowing. I’ve already blown the drive and county road once today. Tonight, we’ve already got 8 inches and it’s coming down fast. Right now, it’s light and fluffy–easy blowing. But the temperature is on the rise…which means it will turn heavy, and, once it turns to rain…which is predicted, you can just about plan on abject misery trying to move it. So, I’m going to start blowing it now, about halfway through the predicted amounts of 7 to 13 inches. (We usually get more than is predicted, because, though we don’t live up on a mountain, we are in a micro-snow belt. There’s this band of heavy snow micro-climate that starts about 1/4 mile to the south of us and ends about 30 miles to the north. You can pretty much figure that, yep, we’re gonna really get it tonight, and, if it ain’t up by morning, plan on spending four to six hours moving it instead of one-and-a-half to three.)

Tomorrow will be snow removal on the roofs. Luckily, I’ve got a guy coming in to do the barn, because that building is too high for me to get at. It takes using the Minnsnowta, a special roof removal tool that’s too heavy for me to handle. Forrest can heft it and loves it, but I can’t even get it up on the roof edge.   I’m stuck with my high tech roof rake…which works well, but not on a high roof like is on the barn.

So, pretty much figure I’m going to be up all night, then all day tomorrow, too. Won’t be getting much else done.

No Email, What a Blessing

I usually check email several times a day.  Manually check it. (I don’t just let it check itself, delivering barrages of messages that demand my attention at whim.) Yesterday and today, I’ve had to take time off from checking it, and what a blessing.  But I know that, starting Monday, probably, I’ll have to begin checking it, again.  Until then, I’m not sure I’ll even open up the email client.  I can interact online if I want to or if I have to via G+…which is where I usually hang out…if I’m hanging out online at all.