I met a cellist, Sam Minker, at Kathy's veterinary hospital Wednesday last.  I was staring at an unwanted Windows update that had interrupted my computer fix, chatting about our latest recording project with Georgette, the resident receptionist with whom I have a humor-filled rapport.  This twenty-something guy leans in over the counter and says, "What did you say?"

I thought he was asking about my grumbling about Windows 10, but, no, he wanted to know about the music project ...so I told him a bit about Zentao Music.  He seemed genuinely excited to meet a working musician.

Outside, he mentioned that he was performing, and, after a harried day of interruptions, I changed clothes, ran a brush through my hair, and carted twenty bucks with me for a ticket.  (Forrest opted to stay home, which was probably a good thing, though, originally, I'd arranged to go because I wanted Forrest to meet Sam.)

Anyway, I pulled in about quarter to seven, went in the main door — a mistake — then, with guidance, found the ticket person, got processed, and found a seat.  The auditorium was about two-thirds filled.

Young dancers were first, and their pirouettes were quite good, and the last performer was graceful and elegant.  Next came a has-been jazz pianist/vocal act.  I won't say anything more about it, thanks.  Now came the trio I'd come to see.  Comprising piano-forte, cello, and violin, the trio began with Brahms.  It was going quite well, indeed.  Then, the grand piano broke.

The pianist, an old hand, got up and engaged the audience about the problem.  Someone got up and, with the aid of a flashlight, began to address the problem — the whole upper end had gone dead silent.  Somebody in the audience offered that they had jumper cables in their pick-up, which got delighted laughter from the audience — that's my town, thanks.  That broke the ice.  It shattered the stiffness, the stiltedness, of the evening that had been, up to that point, rather palpable.  The glass curtain, I call it.  Even when you all pretty much know each other, there's the us and there's the them on both sides, audience and performers.  The gift is to be able to shatter that curtain and have the performance be a co-experience with performers and audience literally 'in concert' with one another.  It happened here.  Wonderfully.  All thanks to the piano tuner having erred earlier in the day when reassembling the grand piano after tuning it up.  It was a blessing, and everybody benefited, the performers keeping their aplomb, the audience rallied to their cause.  Great stuff, that. 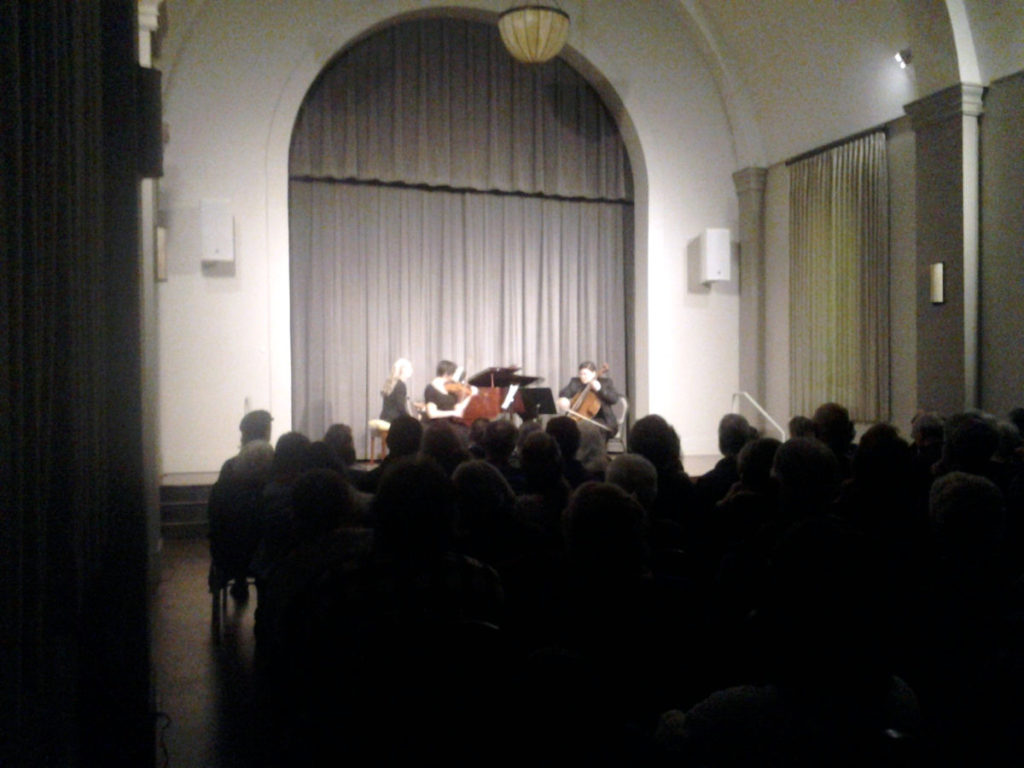