So, this morning, the first thing that comes in on my feed is…a rant about hating Baby Boomers. And, along with that social media post, comes a blast of support from a whole bunch of other haters. I move on, but there’s more, a whole wave of rants about everyone from liberals to conservatives to Bernie supporters to ‘deplorables’ to….

And that’s just the US feeds. Next comes in the UKers and the AUers and the NZers and the…and it’s all hate, hate, hate.  The indigenous and other POC hate the whites, the nationalists despise the immigrants, the young hate anyone beyond their generation, the middle-aged blame the young adults, and so it goes.

I sit back, blink, think, send out a quickly scripted bot to mine, for just thirty minutes, the trends around the main interactive communication net spheres–Faceplant. G-, Mediocre, Twitchirp…. I go down for coffee, walk the dogs, again, then come back.

Sure enough, today’s Internet theme to the posts and comments, even to innocuous posts completely unrelated, generate streams of venomous remarks concerning anyone and everyone the contributor blames for:

Millennials and, what are they, Gen Zers?, hate anyone they classify as a Baby Boomer, within which they lump the very aged WWII Gen, the true BBers, the Gen-Y and the Gen-Xers, too, blaming anyone older than them for everything they find wrong with the world and life. For example: lack of protectionism and slowing globalization, simultaneously. (Ok-aaaaay. Hmmm. There’s consistency all rolled up in one pulpy, irrational burp.) Or the millennial raging on about having to support all the aging previous generations on her dime paying into social security. (They paid a lot more than you did into social security. Honest. You haven’t been working long enough to significantly contribute. And it is something they are entitled to, because they contributed every week, every month, every year, their entire working lives for that benefit. Same thing with Medicare.)

There’s the diehard Clinton supporters blaming everyone else for Hillary losing…except the DNC and the liberal elite, labeling everyone except themselves as bigots and calling for their eradication from the population. (Really!)

And the Blacks–excuse me, African-Americans–blame the whites, calling everyone not sharing both their skin color and their sentiments a bigot, even other Blacks.  Meanwhile, the white supremacists are busy raving against anyone not sharing their intolerances, and the same applies, just swap out pigmentation genes.

The rich blame the poor and the poor blame the rich, while rural points at city and city derides rural, never mind it’s where their food comes from.

The Christians blame anyone not of their faith, especially condemning the atheists, while the atheists blame religion for all the ills in the world.

And so it goes.

I grew to majority (look up the idiom, if you don’t understand it) prior to the rise of the Internet. By the time the Internet became available for public consumption and, yes, abuse, I had lived all over the world, all over the U.S., as well, and gone to schools located in both the  ghetto and in privileged communities. Do you know what? Never, and I mean never, have I experienced the kind of hate, bigotry, and intolerance I now find saturating our cultural landscape. Never.

You know what else? I tolerate bigots. I had to learn to growing up, because, honestly, they were nice people, except for their prejudices. And, once they got to know me, they got over those prejudices (most of them did, anyway).

And I embrace the tolerant, because they demonstrate the finest art of living in their open-minded, unbiased forbearance. They demonstrate charity. (Definition of charity in this use: kindness and tolerance in judging others, usually number 3 on the list of definitions in common dictionaries.)

I tolerate those who hate me because

And I embrace those who put aside their skepticism, their fear, their suspicions ingrained from bad experiences, their crowd-sourced brainwashing, and discover me for who I really am and love me for it, learning tolerance…because that’s how I love others.

In point of fact, I’ve never met anyone, one on one, I couldn’t love for who they are. I may not like how they act–their cruelties, their bigotry, their hate–but, still, when laying that aside, when getting to know them for what they cherish, there is gold there. Everything else is just a product of their negative experiences and conditioning.

I’m sorry to live in a world, in a nation–the U.S.–where those younger than me want me dead and gone, every trace of who I am eradicated from memory, where those a different flavor want me enslaved or at least subjugated to their benefit, where those of different ideology want me silenced. And, when you get your wish, through your own actions, instigation, or through legislating my de-existence, maybe then you’ll find it in you to tolerate and even love those who come after you who condemn you for who they THINK you are and for all the ills they claim you have perpetuated by your existence, even when you were, like I was, fighting for the same causes for which, now, they claim as theirs. 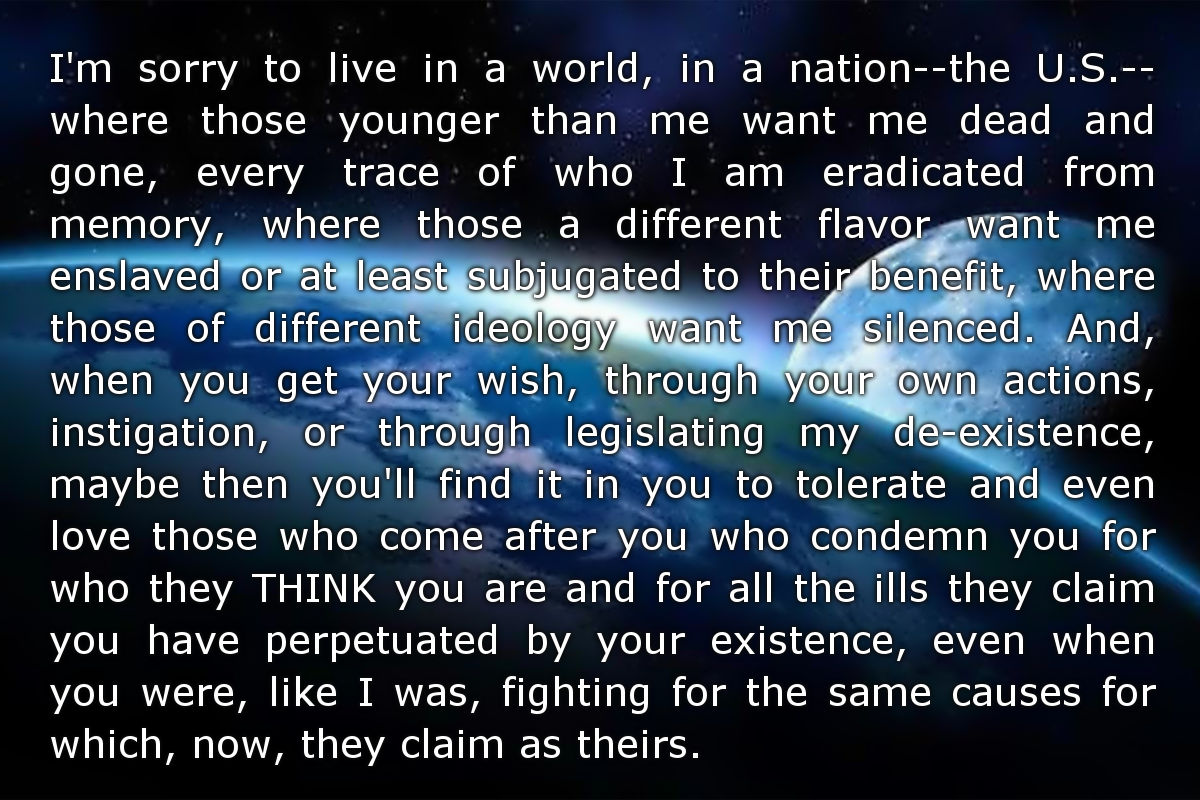